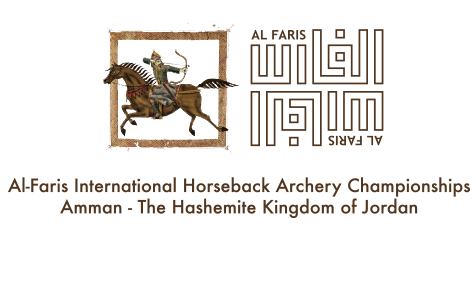 In an effort to preserve and revive the Intangible Cultural Heritage of Horseback Archery, which has deep roots in Arabic, Islamic, Turkish, Asian and European cultures, Al-Faris International Horseback Archery Championship is held under the Royal Patronage of His Majesty King Abdullah II, and the leadership of HRH Prince Hashim bin Al Hussein, the Chief Councilor and Honorary Chairman of the Al-Faris Organizing Committee, in The Hashemite Kingdom of Jordan, since 2011. The championship also promotes interest in equestrianism and the values, arts and sports it encompasses. In addition, the proceeds of the Al-Faris events go to charity (mainly to the families of Jordanian martyrs, as done in 2012).

Al-Faris competitions usually revolve around a variety of Archery Styles – mainly three competing styles – as follows: the Oriental Style, known as “Al-Ghara” – Arabic for Raid, (a newly developed Jordanian Style that combines archery with tent-pegging), the Asian Style, known as the Korean Style - (where three different disciplines are demonstrated: the double double shots, the triple shots, and the multiple shots), and the European Style, known as the Hungarian Style.

The best competitors from 20+ countries participate in this unique event. They compete not only to win the first three ranks per style, but also to win the allocated prize money for the overall best performance and the “Al-Faris Champion” titles.

The Organizing Committee of Al-Faris International Horseback Archery Championship would like to express its utmost appreciation and thanks to each and everyone, who contributed to the success of Al-Faris Championship III. Your participation and contribution have positively enriched the efforts to pr...
Royal Jordanian Airlines

We would like to announce that Royal Jordanian (RJ) is the Official Carrier of Al-Faris IHA Championship III. RJ is delighted to be offering Al-Faris IHAC participants along with their family members and accompanying guests a discount of 15% on selected direct routes of its network. This discount sh...
Al-Faris IHAC Book

Check our Photo Album for both Al-Faris IHA Championship I and II, held in 2011 and 2012.  View Book.
Guests Registration

Those who wish to join and attend Al-Faris IHAC III in 2018, kindly download and fill in the enclosed document and then, send it for processing via email to alfaris@rhc.jo .
Our Previous Events

You can check what was written in the media with regards to our previous events at Horseback Archery Blog Or In The News!
Refresh Your Memory

To refresh your memory of our previous events, visit our Gallery, which comprises of not only all the Albums but also the Videos.
Championship III

The preparations now are in full swing and all information regarding the invitation and registration processes, in addition to the program, rules and regulations, etc. will be published as usual and once ready
Invitation Only

Please be aware that Al-Faris Championship is by invitation-only.
Be Informed

If you would like to be informed about anything pertaining to our event, kindly e-mail us at alfaris@rhc.jo
Follow Us

For more information on Jordan, check the following link: www.visitjordan.com